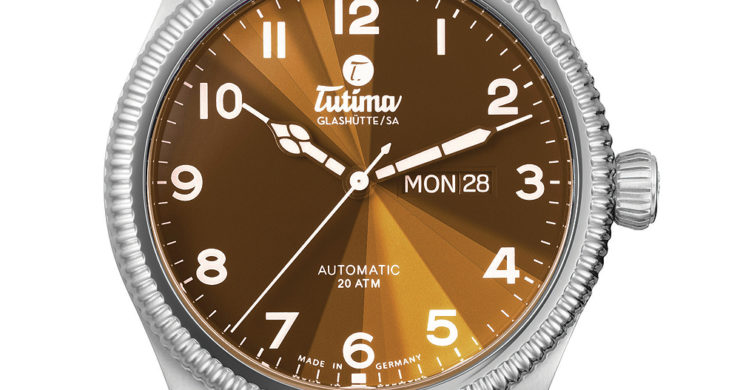 The Tutima Grand Flieger is the revised and modernized re-edition of the historical Flieger chronograph that the German brand introduced in 1941 (and later released in a replica edition in 1990) — which was also the first German-made chronograph outfitted with a flyback mechanism. This year, Tutima introduced several non-chronograph versions of the watch, including one with a sunburst-finish brown dial (below), powered by Tutima’s in-house Caliber 330. The watch maintains much of its predecessor’s period details, including the notched, bidirectional coin-edged bezel with red reference marker at 12 o’clock, and the vintage-style hands and Arabic numerals. The day and date are displayed in a window at 3 o’clock. Over the dial is a domed sapphire crystal with nonreflective coating on both sides; in the back, another sapphire pane offers a view of Tutima Caliber 330, an automatic movement with an “antique gray” rotor, 25 jewels, and a power reserve of 38 hours. The stainless steel bracelet is also a nod to the styles of the past; the new Grand Fliegers are also available with blue or black dials and on leather straps as well as bracelets. Prices start at $2,500.